Step into Amish country for this bittersweet holiday romance. Here you’ll meet Will Henderson, a young man tortured by his past, and Karen Yoder, a young woman looking for answers. Add a desperate father searching for his son, and you have all the ingredients for a first-class romance that will inspire and enthrall.

Every year we resolve to get into the “real” Christmas spirit. Yet Christmas seasons come and go, leaving us with vague pangs of regret. Why does it seem so hard? What are we missing? Familiarity can blind us to the unique power and glory of Christmas. Dan Schaeffer takes us beyond traditional trappings and into the wonder of the best gift of the season – the essence of Christmas. He offers a new lens of insightful observations about the first Christmas, addresses burnout in contemporary Christmas preparations, and gets beyond the story of Christmas to help us experience the spirit of Christmas.

Through the eyes of a shopkeeper on the main street of Jerusalem, “readers” experience the life-changing events of a week that begins with a parade and ends with an empty grave. This Easter gift book combines with an original Swindoll story with beautiful full-color art. Hardcover, 96 pages.

Small-town basketball coach Clay Driscoll is playing defense because everything seems to be fighting against him. He’s saddled with a team he doesn’t want, in a town that won’t support girls’ sports, and where local politics undermines any chance of a winning season. An inspiring tale of perseverance, character, and redemption—based on a true story! (PG.) 108 minutes.

The most magnificent portrayal of the nativity ever! Witness the struggles and joys of the Holy Family—and the Savior’s birth at the turning point of history. Epic in scope yet intimate in detail, this major motion picture spared nothing to ensure historical accuracy and cinematic power. A film to be cherished for years to come! Starring Keisha Castle-Hughes (Whale Rider) and Oscar Isaac. Rated PG (some violence). Dove approved. Approx. 101 minutes.

Historys beloved story of the Three Wise Men is now an all-new animated Christmas classic! From Exclaim Entertainment, home of the hit DVD series BOZ, The Green Bear Next Door, comes The Very First Noel, a beautiful animated holiday special that will joyfully draw families together every Christmas for years to come. Join Melchior, one of the Three Wise Men, (voiced by Andy Griffith) as he narrates the story of his travels in search of a magnificent star pointing him to a newborn King. It’s the journey of a lifetime. 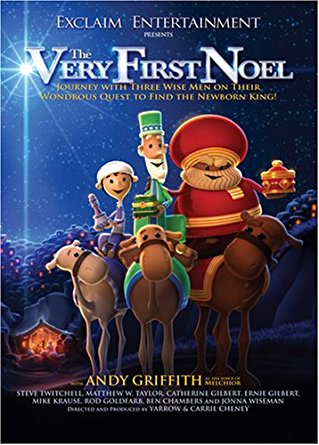 Nicholas was still a young child when he discovered a very special secret that changed his life forever. It was the gift of giving, by which he brought happiness to many people; but in sharing this gift Nicholas had to face many dangers. Here is the fascinating story of the boy whose love and care for others make him one of the most popular figures of all times, Today, more than sixteen centuries later, the entire world celebrates the kindness and generosity of the man we call Santa Clause. Based on historical facts and traditions, NICHOLAS, THE BOY WHO BECAME SANTA, is the beautifully animated film worth watching all year long. FEATURES*30 MINUTES* COLOR*ENGLISH, SPANISH & FRENCH