Who was in the manger that first Christmas morning? Some say he would become a great moral leader. Others, a social critic. Still others view Jesus as a profound philosopher, a rabbi, a feminist, a prophet, and more. Many are convinced he was the divine Son of God.

Who was he really? And how can you know for sure?

Consulting experts on the Bible, archaeology, and messianic prophecy, award-winning legal journalist Lee Strobel searches out the true identity of the child in the manger. If Jesus really was God in the flesh, then there ought to be credible evidence, including:

Eyewitness Evidence—Can the biographies of Jesus be trusted?

Fingerprint Evidence—Did Jesus uniquely match the identity of the Messiah?

Like a deadly disease, sin has infected the American colony of Havenhill, Connecticut, and Josiah Rush seems to be the only person who sees the evil that has gripped the town. Blamed for a fire that nearly destroyed the colony seven years ago, Josiah spent seven years in exile. Now, having returned as pastor of First Church, his cries of alarm fall on deaf ears. Determined to save the town he loves, Josiah Rush endures personal attacks as he battles an insidious unseen enemy who is equally determined to use the town for its own immoral purposes.

With historical appearances by Great Awakening preachers Jonathan Edwards and George Whitefield, this novel portrays spiritual revival as the only cure for a sin-sick nation.

Every church is driven by something. Tradition, programs, finances, personalities, events, seekers and even buildings can each be the controlling force in a church. But Rick Warren believes that in order for a church to be healthy it must become a purpose driven church, built around the five New Testament purposes given to the church by Jesus.

Rob Morgan’s inimitable style will help people reacquaint themselves with the hymns of the faithful. His goal is to keep these traditional hymns vital and meaningful to all generations.

This unique volume features three hundred of the world’s favorite hymns – the music and the background stories – all brought together in one deluxe, hidden-spiral, lay-flat piano edition. Ideal for permanent placement in millions of music rooms, living rooms, and sanctuaries all over the world. Robert Morgan’s devotional-style stories show the emotion and the drama behind the hymns of faith that have changed many lives throughout history. These stories speak to your soul and add depth and meaning as you worship through song.

Hearts of Fire: Eight Women in the Underground Church and Their Stories of Costly Faith

Follows the stories of eight women from such nations as Pakistan, India, and China who have participated in underground worship and experienced persecution and hardship as a result of their Christian beliefs.

An online review states: “I’m so thankful that I came across this book because it was so inspirational. Every story, every testimony of each woman – their courage, bravery and overall commitment to God moved me page after page! I pray over their protection and that they continue to do God’s work and that it carries on generations after them.” 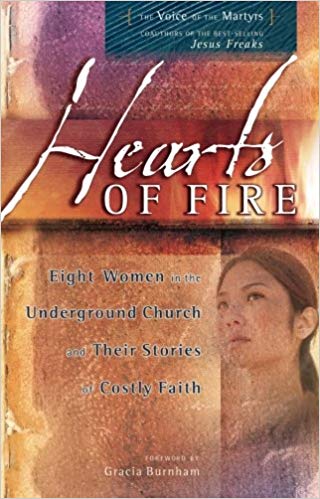 The spark which ignited the German Reformation, Martin Luther battled corruption within the Church while trying to spread the true Word of God to the people he so loved.

The biography of the Early Church’s Greatest Evangelist – The Apostle Paul. Master storyteller John Pollock makes Paul and his amazing story freshly alive, so that you can know the greatest apostle much as Luke and Timothy did as they traveled with him. As you turn the pages, you’ll sense Paul’s motives, his aims and priorities; what mattered to him; and what he was willing to die for.

The apostle Paul. The converted terrorist, inspired author, amazing teacher, and patient mentor.This colossal figure strode boldly onto the stage of the first-century world and left an indelible signature of greatness never to be forgotten. His life? Magnificent! And his ministry? Impressive. While assigned sainthood by some today, by his own description he was “the chief of all sinners.” No other person in the Bible, aside from Christ Himself, had a more profound influence on his world and ours than Paul.

He was a man of real grit, with a firmness of mind and spirit and unyielding courage in the face of personal hardship and danger. Tough, tenacious, and fiercely relentless, Paul pursued his divine mission with unflinching resolve. And God used him mightily to turn the world upside down for Christ in his generation.

But Paul’s message and his style were also marked by gentle grace. This man, who tormented and killed the saints of God, understood and explained grace better than any of his contemporaries. Why? Because he never got over his own gratitude as a recipient of it. God’s super-abounding grace transformed this once-violent aggressor into a humble-but-powerful spokesman for Christ. A man with that much grit desperately needed that much grace.

Perhaps that’s why Paul’s life is such a source of hope for us. If the chief of sinners can be forgiven and become God’s chosen vessel, can He not forgive and use us as well? He can if we too become people of both grace and grit.