When life suddenly turns upside down, there, in the midst of your trials and in the center of your pain is God—comforting, guiding, encouraging, teaching, sustaining. In this perceptive and deeply personal book, renowned pastor and teacher David Jeremiah draws from the beautiful poetry and deep truths of the Psalms—passages that gave him comfort and strength on his journey into the unknown.Interwoven with his own reflections and insights are the inspiring real-life stories of other men and women who have faced unexpected adversity and found that God’s grace is truly sufficient for every need. Softcover Pages: 278

No one can deny that the world is in trouble. Tragedy stalks our streets. Violence and bloodshed fill the new. Today’s political debates spotlight the deep and bitter divisions in a society that often seems to be coming apart at the seams. How do we explain so much chaos? Is there any hope for peace in our time? Dr. David Jeremiah’s dramatic narrative on the Book of Revelation answers these and many more challenging questions, for those who have ears to hear and eyes to see what the Spirit of God declares. Soft-cover, 264 pages. 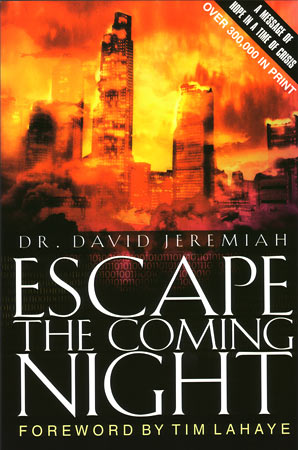 In Agents of the Apocalypse, you will become acquainted with the ten most prominent players in the book of Revelation—those who are the primary agents of the apocalypse. As we gain understanding about these key individuals in God’s master plan for this world, it will strengthen our resolve to stand firm even in the face of worsening circumstances. This book reveals the overarching truth of Revelation—that the Christian’s victory in Christ is an absolute certainty. Features: Ten Chapters including: The Exile, The Martyrs, The 144,000, The Dragon, The Beast from the Earth, The Beast from the Sea, The Victor, The King, The Judge Fictional introductory account for each chapter followed by “The Scripture Behind the Story” Informative charts throughout the book Hardback book Pages:304

Throughout history, Babylon has been a symbol of the world’s worst evils—extreme decadence, infinite cruelty, ravenous power, and implacable contention against God. Nowhere in the Bible do we get a more vivid picture of the malevolent nature of Babylon than the book of Daniel. Teeming with prophetic markers and visions—many of which have already been fulfilled—the parallels between the world described in the book of Daniel and the world today are staggering. In Agents of Babylon, you will become acquainted with the most prominent players in the book of Daniel—those who play a role in Daniel’s life and in the prophetic end-time plan of God. Both have immense value to us today. They bring the cyclical nature of history out of the past and project it into the future to show us how we must live in the present to prepare ourselves for the time yet to come. In fact, the entire book of Daniel—both the personal portraits and the prophecies—demonstrate why the kind of courage, conviction, and devotion to prayer Daniel pictures are as critical today as they were in his time. Daniel’s prophecies were delivered to and through a cast of characters that Dr. David Jeremiah calls, “the agents of Babylon.” The agents were kings and rulers, royal counselors, animals, angels both good and evil, and inanimate objects like trees and statues. All play a part in the unfolding story of Daniel in Babylon. In Agents of Babylon, each agent is introduced through a dramatized narrative that is followed by an exposition of the “Scripture Behind the Story,” and ends with a “Daniel for Today” feature, offering practical life application and hope for the future. Hardcover 361 pgs.